“Where are you from?” my taxi driver inquired shortly after I arrived in Dubai, part of a brief stopover on my trip around the world.

“The United States,” I replied, amused that my first contact with a human being in Dubai was with a Bangladeshi, not an Emirati.

The driver, who had told me his name was Shamsur, looked confused, thought for a minute, then asked, “Do you mean the United States of America?”

“Yes,” I said, remembering that in most parts of the world, the USA is known simply and iconically as “America.” 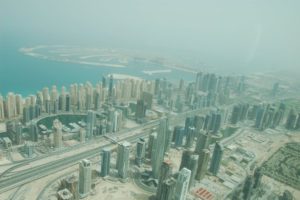 As the cab raced toward the center of town, I thought about how Dubai is quickly attaining iconic status in its own right.

It’s been called Las Vegas without the casinos, a place where extremely wealthy visitors can part with their money. I’d heard the stories about excess: excessive shopping sprees, excessive horse racing (and even camel racing!), and extremes ranging from indoor snow skiing to the world’s tallest buildings.

But I was a different kind of visitor. I was on a shoestring budget. And I wasn’t entirely sure how well I’d fare in a playground for the rich, especially considering that I was only going to be in town on a day-and-a-half layover en route to Johannesburg. 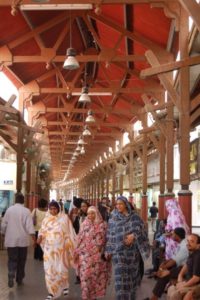 As we headed into town the cab flew down orderly streets lined with massive, glittering skyscrapers anchored by fine retail shops full of glassware, furniture and expensive shoes. There was nary a person in sight. It reminded me of downtown Los Angeles.

Closer to my hotel the order gave way to the noisy, teeming, chaotic commercial center of Deira. There, the streets were filled with hundreds of south Asian men dressed in shalwar kameez selling food from carts, pulling wheelbarrows full of supplies, and bargaining loudly with customers in stores jammed full of cheap electronics. It reminded me of Bombay.

As Shamsur dropped me at my hotel room I could hear the ancient cry of the muezzin in a nearby mosque rise above the din of a thousand car horns honking, and all around me in the distance, gleaming multi-million dollar shopping malls and hotels erupted from the vast camel-studded desert.

My curiosity piqued, I suddenly realized that I’d have no trouble killing 24 hours simply exploring the fascinating contrasts that define Dubai.

EAST MEETS WEST – IN THE MALL, OF ALL PLACES

Considering that it was June, a month when the mercury tops at least 105 degrees each day, I figured the mall was the best place to begin my day of discovery. So the next morning I picked one and set off— in an air-conditioned cab—to do some window shopping.

Hanging out in shopping malls is definitely the preferred activity of both locals and tourists in Dubai, so I didn’t feel like I’d miss out on a more “authentic” experience by choosing to spend most of my 24 hours there.

All told, there are 40 or so malls and shopping complexes in the metro area of Dubai, which is pretty astounding considering that it’s only a few miles from end to end.

Shopping malls are not only the most common landmark in Dubai, but also a perfect microcosm of the country. Each one has a slightly different atmosphere, but they all manage to reflect Dubai’s modern 21st-century cosmopolitan side, while at the same time allowing streaks of its traditional Muslim heritage peek through.

The first place I went was a classic American-style complex, complete with chain stores, food court, and cinema multiplex—albeit with some local touches that you definitely don’t see back home.

Groups of rich Saudi Arabian women, with only their eyes peeking out from behind drapy black veils, talked on cell phones while shopping for the latest Prada handbag. They handed over their money to scruffy migrant workers with humble origins in India, Africa and the Philippines.

Prayer rooms were tucked into each level of the mall, alongside the restrooms and baby-changing rooms. Local customer service staff in flowing white robes spoke fluent English while assisting clients from Russia, England and Japan. And the food court served everything from sushi to shawarma, but you couldn’t find moo-shu pork on the menu in this Muslim country.

I learned that these divergent strains can largely be attributed to the fact that Dubai has totally transformed itself over the last 30 years.

Ever since the government started selling the city as a top-tier financial and commercial hub in the late 1970s—then later as a luxury tourist destination—new money and new migrants were superimposed on top of the dusty old traditional city of fishermen and Bedouin traders.

By most accounts, more than 70% of the current residents of Dubai are non-Emirati, with most hailing from places such as India, Pakistan, Bangladesh, Thailand, and the Philippines. They are not only the builders and shop workers, but the bankers, flight attendants, cooks, teachers, and real estate agents.

And thanks to the relatively liberal attitudes of Dubai’s natives and leaders, rich and poor, Muslim and Hindu, expatriate and native all manage to co-exist fairly peacefully—to a certain point.

Throughout my visit I found English to be the main language spoken, and even though I was wearing relatively skimpy Western clothing, I never got hassled, ogled or even stared at. Non-Muslims and Westerners are allowed to freely practice their religions and customs, and educate their children how they wish.

But if you default on your mortgage or get caught getting X-rated in a public place—as a British couple recently did—the harsh recriminations will remind you that a conservative heart beats just under the liberal skin of Dubai.

My next stop was a mall with a more distinct Middle Eastern flair, the Madinat Jumeirah. It was modeled after a traditional Arab souq (marketplace), but instead of being hot, dirty and overcrowded, it is 100,000 square feet of calm, air-conditioned indoor coolness.

Elegantly attired couples quietly handed over gold credit cards to snooty sales staff in stall-like “nooks,” which replaced the dusty stalls and hordes of squawking merchants that you’d see at a souq in the streets of Tehran or Casablanca.

My last stop was Dubai’s world-famous gold souq, one of the best places to window-shop in all of Dubai. In this giant indoor bazaar more than 300 merchants hawk one item and one item only: gold jewelry.

It was pretty easy to kill an hour there hungrily consuming the goods with my eyeballs only. I managed to be among the 5 percent of tourists who don’t buy gold in Dubai.

When it started to cool down in the early evening, I decided it was finally safe to venture outdoors and explore some of Dubai’s other landmarks. The most famous building is the Burj al-Arab, which most people in America know simply as that iconic hotel built in the shape of a sailboat.

Naturally, I was curious to see the interior, which I’d heard was fabulously decadent. I figured if I couldn’t afford to actually stay in a room, I could at least gawk at the gilded columns, marble floors and impeccable service which had earned the Burj the distinction of being the only six-star hotel in the world.

However, before I even set foot on the island the hotel is perched on, I learned that you have to pay the equivalent of $40 simply to go inside, unless you are a guest.

I decided to take a pass on that one, and instead rode a gondola through the Madinat Jumeirah’s extensive canal system, past the Italianate buildings and through its numerous waterways and courtyards. In the twilight I was treated to a fabulous view of the stunning Burj, which glowed an eerie blue.

For a moment I forgot that I was in Dubai, and not Venice or Las Vegas (minus the gambling and drinking).

At 9 o’clock the next morning it was already nearly 80 degrees and my mini-adventure was already over. I jumped in a cab and headed back to the airport, but it was gridlock all the way.

Unfortunately, Dubai’s transportation infrastructure has been unable to handle the rapid expansion that has been going on for the last decade or so, which means that traffic crawls along painfully slowly during morning and evening rush hour.

Two recent developments are set to change that, however. Now that the recession has weakened Dubai’s famous real estate and financial markets, the city is literally emptying out. Thousands of foreign-born laborers, taxi drivers and hotel workers have had to pack up and go home.

However, that has not stopped construction on the Dubai Metro, which will have both underground and overground sections stretching from one end of the Emirate to the other.

And in typical Dubai fashion, it is a project that will break records: When it’s finished in 2010 the Metro will be the longest fully-automated rail system in the world; it will also be the first transit system to sell station naming rights to corporations.

As my plane took off over the Arabian Gulf, I marveled at the archipelagos of man-made islands just off the coast, and realized that Dubai’s paradoxical charm had captured me.

When I return someday I’ll make sure it’s for longer than 36 hours. I’ll need time to do more than just skim the surface of this odd little outpost on the horn of Arabia, where even the most mundane of shopping malls seems exotic.