The noise of the chopper was deafening as we strapped in at Pemba airport. 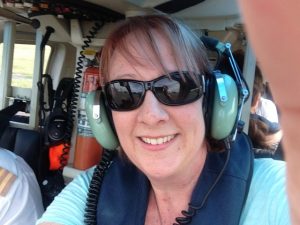 “Put your headset on!” cried the pilot, as we lifted off and were whisked north to Quilalea island, where we arrived about 15 minutes later.

Once we were deposited us at our destination and the pilot took off back to Pemba, it took me a minute to recover from the excitement of my first-ever helicopter ride. Then I noticed it — the blissful quiet, which sat in stark contrast to the shrill whirr of the blades just a few moments before.

As our genial hosts Leon and Claudia Joubert led us down the dirt path from the landing pad to the reception area, the only sounds were those of birdsong filtering through 1000-year-old baobab trees, bushes swaying gently in the breeze, and iguanas skittering through the grass.

I decided I could get used to this.

One of 32 islands in Mozambique’s northern Quirimbas archipelago, the tiny Quilalea Private Island is home to just one resort, Azura Quilalea. I was invited to spend a couple of days there as a ‘castaway’ with several other writers. 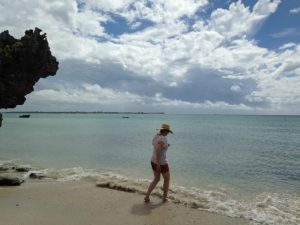 At just 1.2 km long and .5 km wide, the island is so small that the shimmering aquamarine sea is visible from nearly everywhere.

So enticing did it look that the first thing I did was dip my toes in the water and rejoice. Then, after being shown to my sweet, spacious villa — where I spent more than a moment gawking at its sheer size — I planted myself on my patio with pina colada in hand, watching the dhows float by as the sun set over the lavender horizon.

Yes, I could REALLY get used to this.

There are only nine thatch-roof villas on the island, each with the aforementioned sea view, and also amenities fit for a queen (or king): my room had the most spectacularly large and comfortable canopy-covered king-size bed, indoor and outdoor showers, his-and-hers sinks in the rustic-chic bathroom, and all the privacy a honeymooning couple could want. (Note to self: come back here on honeymoon.) For those who have the funds to REALLY live it up, there’s also a cliff-top villa with a private plunge pool, dining area and beach (pictured above). 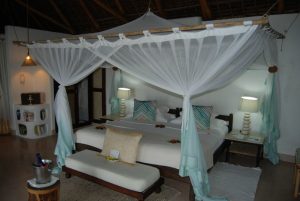 The real beauty of the villas is in the small details: the corner nook that holds books left behind by previous guests (which is a godsend as there is no internet or TV in the rooms); the wicker beach bag hanging in the closet, ready for a day in the sun; and the whimsical mosaic tile designs that liven up the shower. Even the butter in the complimentary food tray has a welcome message etched in it by the staff.

The details come through in the understated, open-air beachside restaurant as well, where silvery jellyfish lamps dangle overhead, striking black-and-white photos hang in antique frames, and staff can customize meals for even the most ardent vegetarian or picky child. 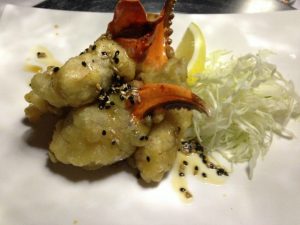 Meals are occasionally served in the restaurant, but you can also opt for a candlelit dinner right on the sand, or in the forest under the baobabs. The resort does not boast a famous chef nor a signature dish, but the food is outstanding, and naturally seafood features heavily on the menu.

We had an exquisite evening dining experience under the baobabs that we won’t soon forget, feasting on mangrove crab claws and ceviche lit only by the flicker of bejeweled glass lanterns.

From sea to shining sea

Part of the Quirimbas Archipelago marine sanctuary, Quilalea island is surrounded by waters teeming with turtles, whales, dolphins, and coral reefs inhabited by hundreds of tiny, colorful fish. Some of the best snorkeling is just off the main beach, though you can also opt to have equipment brought to one of the other three beaches, including the secluded Turtle Beach, which is on the opposite end of the island from the main reception area. 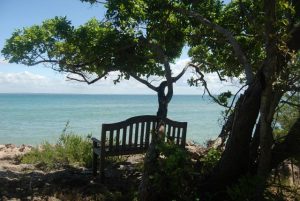 Accessible via a lovely 20-minute nature walk through the rainforest, Turtle Beach is also an ideal place for a private picnic. We wasted an afternoon there in a haze of chablis and cheese, surrounded by hermit crabs marching purposefully along the sand. On our return walk, we poked our heads down paths lined with tropical flowers and exotic birds, and stumbled upon hidden vistas begging to be admired, if only for a few minutes.

During one of our wanderings we came across Leon and a group of employees moving a nest of sea turtle eggs from its location near the eroded water line to a safer spot higher up the beach. At Azura they take eco-tourism seriously — preservation of the wildlife and marine environment is a day-to-day reality, not just talk. 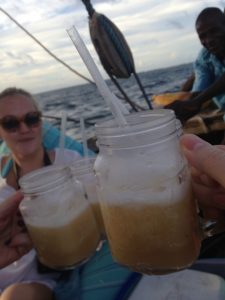 A planned excursion to the nearby mangrove lagoon didn’t pan out due to weather, so we weighed our other options. Sportfishing and scuba diving were offered as possibilities, but instead we launched a kayak into the sea with all the best intentions of circumnavigating the island. However, the heat and our lack of fitness led to us abort the mission early, and instead we spent a couple of hours drinking pina coladas by the newly-resurfaced pool.

I was definitely getting used to this.

We did manage to get back on the water later, however, during our remarkably relaxing sunset dhow cruise. A crew of local Mozambican fisherman floated up to the beach in a 40-footer and we hopped on, then spent the next hour lazily girding ourselves with cocktails served in mason jars as the men deftly worked the sails. At Azura, there is no place that cocktails are not welcome.

After two days of strenuously doing not much at all, we felt it was time to recharge with a massage and headed to the spa, which sits on a cliff overlooking the main beach. It’s secluded enough that those on the beach can’t see in, but we could get a stunning view of the ocean while being plied with hot stones (there are dozens of treatments to choose from). 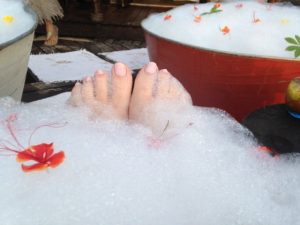 As if that weren’t enough of a guilty pleasure, the coup de grace came later that evening when we were surprised with a sunset soak in individual-sized outdoor baths. We quickly turned to prunes as we sipped mojitos and snacked on hors d’ouvres while essential oils worked their magic on our sunburned skin.

It occurred to me that if we were back home, we’d either be glued to our computers or stuck in a traffic jam somewhere. But freed from the distractions of work and social media, instead we were sharing stories, telling jokes, and connecting with each other. Forging friendships that lasted long after the trip ended.

Then I realized that’s why people choose Azura Quilalea — to indulge in the luxury of time. Time to not just pamper yourself with a massage or savor your food instead of wolfing it down, but time to re-connect with those you love. I saw it in the faces of the family splashing around in the pool, and in the eyes of the engaged couple holding hands at the bar.

Quilalea Island is truly a magical little paradise that reminds you to slow down and smell the roses — or the salty sea air, as it were.

I think we can all get used to that.

For more information about Azura Quilalea or to book a stay, go to http://www.azura-retreats.com/azura-quilalea/

Guests can fly to Quilalea via Airlink. Airlink offers direct scheduled flights from Johannesburg to Pemba, Northern Mozambique, and through its alliance with SAA, travellers can connect throughout Southern Africa and the world. Airlink is also a member of SAA’s loyalty Voyager programme. Book atwww.flyairlink.com , or call SAA Central Reservations on +27 11 978 1111